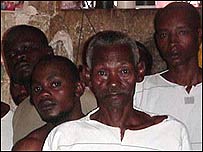 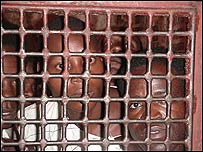 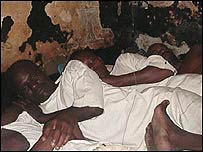 Inside Kenya's 'worst' prison
As a new government considers sweeping reforms to Kenya's much criticised justice system, BBC News Online's Gray Phombeah is allowed several hours within the walls of one of the country's most notorious jails.
Nairobi Prison is a maze of chain-link fences, razor wire and guard towers in the city's busy industrial area.


Inside, the first roll-call, to ensure all inmates are accounted for, is under way.

In quick succession, iron doors open to reveal hundreds of half naked bodies, pressed together on the concrete floor of their cells.

Their cages are filled with the fetid smell of sweat, dirt and human waste.

Evidence that the prison is being choked with inmates, some on short sentences and others waiting to appear in court, is not exactly hard to find.

"This is the worst congested prison in the country," says David Mwania, who is in charge of Nairobi Prison, built in 1911.

In the capital wing, housing more than 400 inmates facing the capital punishment, dozens of inmates are herded into tiny cells with the capacity for between one and five prisoners.


"There are 12 inmates here in this cell meant for only three people," Mr Mwania says, pointing to an old, stinking cell.

"There are only two mattresses and no blankets."

One of the inmates is 30-year-old John Njoroge Njagi, who has been here for four years, facing a charge of robbery with violence, a capital offence.

"I haven't put on my clothes because we've been sweating throughout the night," he says.

"Four years on, my case is still pending in court and I am still here."

It is breakfast time - a mixture of boiled water and maize flour with no sugar is served in the open air grounds of the prison.

Thousands of inmates in tattered prison uniforms, and some in civilian clothes, emerge from their cells.

I don't think any human being can survive here.


This is the frontline of the prison overcrowding crisis in Kenya. You can sense the tension here.

"As you can see, some of them have no prison uniform - this is another problem here, " says David Mwania.

"We don't have enough uniform for all prisoners."

In one prison ward, 250 squatting inmates serving short sentences, are crammed into one room meant for only 50 prisoners sharing only five mattresses.

The prison is also home for nationals of other countries. Colin Alexander from Nigeria has been here for eight months, surviving on half-cooked ugali, Kenyans' staple food, awaiting trial:

"This is the worst prison I have ever seen. Everything about this place is bad, including the treatment from the wardens.

"We are surviving by the grace of God - I don't think any human being can survive here."

And men of God are also doing time here - people like Bishop Makhokha of a home-grown church, who claims he was arrested during the December election campaign after his congregation stoned former President Daniel arap Moi's motorcade in Kakamega, western Kenya.

"I spend my time here preaching and spreading the word of God," he says.

But not many have found consolation in religion.

Fifty-two-year-old Thuo Thiong'o - popularly known as TT - has been here for four years facing a charge of murder. He says sodomy, a criminal offence in Kenya, is common in the prison:


Many are waiting for a trial date


"Because of congestion, people here sleep pressed body to body and this body contact leads to these kind of tendencies."

But the Nairobi jail, like many other facets of Kenyan life, is also catching the wave of freedom after the collapse of former President Moi's 24-year rule.

Thiong'o and his fellow inmates are now demanding change.

"You can't solve any problem here without dealing with congestion. Also we want provision for basic necessities - blankets, for example, mattresses, good food, and we want a prisoner-friendly system and law, and less delays in processing our cases in court," Thiong'o says.

"We are not here thinking about sex. But if other countries can make provision for an inmate to meet his wife while in jail - Why not us? We would also like that."

It is lunchtime and the prison staff conduct the second roll call of the day.

The smell of ugali and boiled vegetables mingling with the overpowering stench of raw sewage is everywhere.

Until now, little was known about what went on inside prison walls in Kenya.


There is no room for the new arrivals


For many years, concerns have been raised over the inhuman conditions in Kenyan jails and claims of torture, brutality and congestion have been frequent.

Since coming to power two months ago, the new Narc government, which overthrew Kanu after four decades in power, has promised to review the prison system and improve the living conditions of more than 50,000 prisoners in the country.

But for now, the brutality and negligence which have been so present at Nairobi Prison is the hallmark of jails throughout Kenya.

Mr Mwania, who has been in the prison service for 20 years, sums up the frustrations shared by the prison staff and prisoners:

"The story is the same everywhere in our jails. Congestion because of delays in court cases, leading to more and more congestion. Lack of funds to provide for basic essentials for inmates. Simply, the system cannot cope anymore." 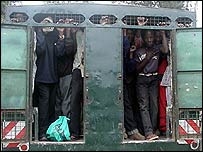