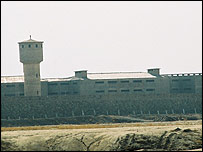 Pul-e-Charkhi prison near KabulPul-e-Charkhi, also known as Afghan National Detention Facility, is the largest prison in AFghanistan, east of Kabul. Construction of the jail began in the 1970s by order of former president Mohammed Daoud Khan and was completed during the 1980s.

The prison has been renovated in recent years by the help of the United States Army Corps of Engineers.

By September 2009, the U.S. had transferred some 250 former detainees from its Guantánamo detention camp to Pul-e-Charkhi, often to the shock of their waiting families.

Kabul Women's Prison is located in an area near an almond orchard in Kabul. The facility is now operated under the direction of the Ministry of Justice by the Director General of Central Prisons. The Corrections System Support Program, a State Department program, has worked to develop relationships with the prison staff and key personnel to assist with training and mentoring. There is a small kidergarten class of about 14 boys and girls inside where they are taught literacy skills.

There are presently about 120 women and 35 children living in the Herat Women's Prison, and about 50 children over age 7 have recently been moved to a new family shelter nearby to their mothers. Here they receive meals, heath care, clothing, daily classroom education and regular visits to their mothers.

The knitting group at Herat Women's Prison is composed of a group of about 15 women who enjoy knitting for themselves, for the other female inmates and their children and to provide knitted clothing and items that can also be sent to female inmates at other women's prisons in districts in Afghanistan. ChildLight Foundation has provided yarn and supplies for this project and continues to support the vocational training knitting program.

Childlight Foundation for Afghan Women and Children works in collaboration with the Correction Systems Support Program and the Ministry of Justice and Prisons to provide improved literacy, health and vocational training programs to female inmates in several facilities throughout Afghanistan.