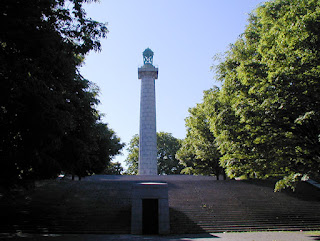 The Prison Ship Martyrs Monument that stands today in the center of Fort Greene Park is a 1908 memorial to the 11,000 men, women and children who died in horrid conditions on the British Prison Ships during the Revolutionary War. The Monument, which is sometimes referred to as the Soldiers and Sailors Monument, stands in the center of what was then called Fort Putnam, named after Gernal Putnam. The Monument you see today is actually the third incarnation of this sacred shrine. The story of the horrid Prison Ships – and the ghastly conditions suffered by the men, women & children imprisoned on them during the Revolutionary War – is one of the most disturbing chapters in American history.

During the American Revolutionary War, which began in 1775, the British arrested scores of soldiers, sailors, and private citizens on both land and sea. Many were imprisoned simply because they would not swear allegiance to the Crown of England. Besides American civilians and resistance fighters, the British captured the crews of foreign ships on the high seas, especially Spanish vessels. The apprehended soldiers, sailors and civilians were deemed by the British to be prisoners of war and were incarcerated. When the British ran out of jail space to house their POWs they began using decommissioned or damaged ships that were anchored in Wallabout Bay as floating prisons.

Life was unbearable on the prison ships, the most notorious of them being the Old Jersey – which was called "Hell" by the inhabitants. Disease was rampant, food and water were scarce or nonexistent, and the living conditions were horrendously overcrowded and wretched. If one had money they could purchase food from the many entrepreneurs who rowed up to the boat to sell their wares. Otherwise, the meager rations would consist of sawdust laden bread or watery soup.

A great number of the captives died from disease and malnutrition. Their emaciated bodies were either thrown overboard or buried in shallow graves in the sandy marshes of Wallabout Bay. Even thought the British surrendered at Yorktown. Virginia in 1782, the surving prisoners were not freed until 1783, when the British abandoned New York City . (A footnote: after the war, the British Commander in charge of the Prison Ships was brought up on war crimes charges and was subsequently hanged.)

In the years following the war the bones of the patriots would regularly wash up along the shores of Brooklyn and Long Island. These remains were collected by Brooklynites with the hopes of creating a permanent resting place for the remains of the brave Prison Ship Martyrs. In the early 1880's the first Martyrs Monument monument was erected by the Tammany Society of New York. It was located on a triangular plot of land near the Brooklyn Navy Yard waterfront in what is now called Vinegar Hill.

By the 1840s, the original monument was in a state of disrepair and neglect. By 1873 a large stone crypt was constructed in the heart of what is now Fort Greene Park (then called Washington Park), and the bones were re-interred in the crypt. A small monument was erected on the hill above the crypt.

By the close of the 19th century, funds were finally raised for a grander more fitting monument for the Prison Ship Martyrs. The prestigious architectural firm of McKim. Meade and White was commissioned to design the large 148 ft. tower which stands today in the park. It was unveiled in 1908 with a grand ribbon-cutting ceremony presided over by President Taft. The monument originally housed a staircase and elevator to the top observation deck, which featured a lighted urn and beacon of light which could be seen for miles. The elevator was operational until the 1930s when it, and the monument, fell into disrepair due to a shortage of public funds, neglect and lack of community interest. The elevator was eventually removed by the city in the early 1970s.