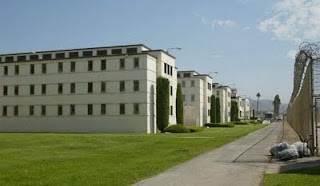 Inmates rioted in Mississippi's Adams County Correctional Center, a prison operated by the for-profit Corrections Corporation of America. The Huffington Post reports on the uprising "Sunday's riot is not the first time CCA prisons have seen violence. The high level of violence at a CCA-run prison in Idaho has prompted federal lawsuits, public scrutiny and increased state oversight. In 2010, Vermont inmates being held at a CCA prison in Tennessee were subdued with chemical grenades after refusing to return to their cells."

CCA's management of prisons is also the subject of Mark Dow's recent letter to the editor of the Leavenworth Times. "Democracy and prison privatization," Dow writes, "are natural enemies."
at October 28, 2020

Email ThisBlogThis!Share to TwitterShare to FacebookShare to Pinterest
Labels: Mississippi