An Investigation into Solitary Confinement and Mental Illness 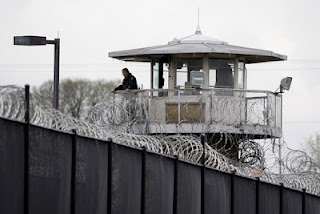 Pennsylvania, with its long history of solitary confinement, is at the center of a new conflict. Once again, the limits of human endurance are the crucial issue. The Nation reports on a Justice Department investigation into the damaging effects of long-term isolation on inmates suffering from mental illness:
"The investigation into SCI Cresson could have important implications beyond Pennsylvania. In addition to determining whether it “provided inadequate mental health care to prisoners who have mental illness [and] failed to adequately protect such prisoners from harm,” according to the DOJ’s official release, investigators will also consider the practice of subjecting mentally ill prisoners to “excessively prolonged periods of isolation, in violation of the Eighth Amendment,” with its ban on cruel and unusual punishment. Even if the particular abuse leveled at McClellan is found to be an aberration, holding mentally unstable prisoners in solitary confinement is a common practice in prisons and jails across the country. With major studies showing that prolonged isolation can aggravate and even contribute to mental illness and a small number of states moving to reduce their reliance on the practice, the DOJ investigation could be a significant step toward banning solitary confinement for mentally ill prisoners."
at October 28, 2020

Email ThisBlogThis!Share to TwitterShare to FacebookShare to Pinterest
Labels: Pennsylvania